War Drums Getting Much Louder 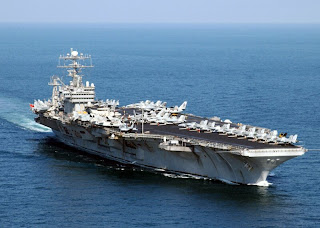 "According to British media, the US is set to attack Iranian military facilities. DEBKAfile’s military sources add that the USS Abraham Lincoln Strike Force is heading for the Persian Gulf.

War tensions in the Middle East have shot up - not only over the signals flashing between Syria, Lebanon, and Israel, but also on the US-Iranian front in Iraq in the wake of rising in violence around the Basra conflagration.

Tuesday, April 8, US Iraq commander, Gen. David Petraeus and ambassador to Baghdad, Ryan Crocker, will stress in their report to Congress that Iran is waging war on America in Iraq, say sources in Washington, London and Baghdad.

This emerged strongly last week, when US intelligence learned that Iran had intervened directly in the Iraqi government’s crackdown on renegade militias in Basra and southern Iraq, by directing and provisioning those militias through the Revolutionary Guards’ al Qods Brigades.

Official sources in London predict that Iran’s intervention against the American effort to stabilize Iraq may well prompt a US attack on the military installations in Iran which are orchestrating the interference.

Gen. Petraeus is on record as accusing Iran of being the source of the daily rocket bombardment of Baghdad’s Green Zone, seat of government and US diplomatic and military headquarters.......

Saturday, US defense secretary Robert Gates turned up in Oman, the site of big American air bases, for talks with Sultan Qaboos. He then flew straight back to Washington. While Gates insisted to correspondents aboard his plane that the US is committed to a diplomatic solution for Iran’s covert nuclear program, the surpise visit struck sparks in the already fraught regional atmosphere, particularly as it followed on the heels of US Vice President Dick Cheney’s talks in Oman two weeks ago.

DEBKAfile’s Middle East sources sum up how Tehran and Damascus read these events and the picture they have built up of Washington’s intentions as combined with Israel’s military steps:

1. US is preparing to attack the Iranian military installations linked to subversion in Iraq. The operation will widen out into strikes on the Islamic Republic’s suspect nuclear sites.

2. Israel will use the chance for a concurrent attack on Syria.

4. A broad, coordinated US-Israeli offensive will be mounted against Iran, Syria and Hizballah.

Both believe Washington and Jerusalem are in close military step. Neither is reassured by soothing statements from prime minister Ehud Olmert and defense minister Barak that Israel does not seek violent confrontation - especially when the US administration is withholding all comment. Hence the high state of preparedness ordered by the jittery governments in Tehran, Damascus and Beirut."
Posted by Tony at 6:51 AM