Secret US plan for military future in Iraq 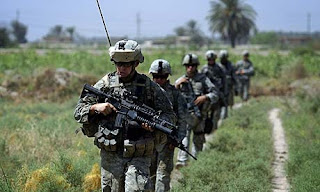 "A confidential draft agreement covering the future of US forces in Iraq, passed to the Guardian, shows that provision is being made for an open-ended military presence in the country.

The draft strategic framework agreement between the US and Iraqi governments, dated March 7 and marked "secret" and "sensitive", is intended to replace the existing UN mandate and authorises the US to "conduct military operations in Iraq and to detain individuals when necessary for imperative reasons of security" without time limit.

The authorisation is described as "temporary" and the agreement says the US "does not desire permanent bases or a permanent military presence in Iraq". But the absence of a time limit or restrictions on the US and other coalition forces - including the British - in the country means it is likely to be strongly opposed in Iraq and the US......

Following recent clashes between Iraqi troops and Moqtada al-Sadr's Mahdi army in Basra, and threats by the Iraqi government to ban his supporters from regional elections in the autumn, anti-occupation Sadrists and Sunni parties are expected to mount strong opposition in parliament to the agreement, which the US wants to see finalised by the end of July. The UN mandate expires at the end of the year........"
Posted by Tony at 8:39 PM