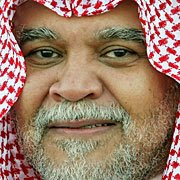 "The Serious Fraud Office's decision to drop its investigation into alleged bribery and corruption involving arms deals between BAE Systems and Saudi Arabia was overturned by the High Court today.

The ruling was an extraordinary victory for anti-bribery pressure group Corner House Research and the Campaign Against Arms Trade (CAAT).

The Serious Fraud Office (SFO) investigation arose out of BAE's £43 billion Al-Yamamah arms deal with Saudi Arabia in 1985, which provided Tornado and Hawk jets plus other military equipment.

In December 2006, the then attorney general, Lord Goldsmith, announced that the investigation into the arms company was to be discontinued.

Tony Blair, prime minister at the time, said that the Saudis had privately threatened to cut intelligence co-operation with Britain unless the inquiry was stopped.......

It is understood that the most likely course will be that the SFO will have to reconsider its decision.

Documents released to the court alleged that threats had been made by the Saudis to make it easier for terrorists to attack London by holding back security information.

The judges heard investigators were told there could be "another 7/7" with the loss of "British lives on British streets".

Prince Bandar, the head of the Saudi national security council and son of the crown prince, was alleged to be behind the threats.

He has been the subject of accusations that he took more than £1bn in secret payments from BAE........"