Warlord: The rise of Muqtada al-Sadr 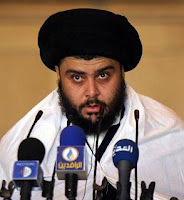 How did a small-time cleric from the outskirts of Baghdad become the most influential figure in the power struggle shaping post-war Iraq? In his acclaimed new book, our correspondent Patrick Cockburn chronicles the events that propelled Muqtada al-Sadr to centre stage
The Independent

"......Another development deeply alarmed the CPA and the US military commanders: co-operation was growing between Shia fighters in Najaf and Sunni fighters in Fallujah. Military supplies came to the beleaguered Mehdi Army men from Fallujah through Karbala. "Fighters came from Fallujah though there were not many and it was towards the end of battle," says Ali Ahmed. "They were useful because they had also fought the Americans and were experienced in street fighting tactics."

The co-operation was brief, but was an important motive for the US to bring the crisis in Najaf to an end. Losses among his men were heavy, but Muqtada al-Sadr had emerged the winner because he had challenged the US-led occupation, held off their greatly superior army for weeks, and survived without making concessions that would weaken him permanently."
Posted by Tony at 6:11 AM