Everything His President Wants to Hear 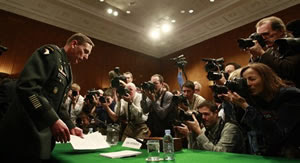 "General Betray Us? Of course he has. MoveOn.org can hardly be expected to recycle its slogan from last September, when Gen. David Petraeus testified in support of escalating the U.S. war in Iraq, given the hysterical denunciations that worthy group received at the time. But it was right then—as it would be to repeat the charge now.

By undercutting the widespread support for getting out of Iraq, Petraeus did indeed betray the American public, siding with an enormously unpopular president who wants to stay the course in Iraq for personal and political reasons that run contrary to genuine national security interests. Once again, the president is passing the buck to the uniformed military to justify continuing a ludicrous imperial adventure, and the good general has dutifully performed.

So why are we surprised? Why do we expect the generals to lead us on the path to peace when that is the professional task of statesmen and not warriors? It is an abdication of civilian control of the military, the basic principle of American constitutional governance, to assign a central role to an active duty general to make the decision to end the war......"
Posted by Tony at 7:27 AM