On Which Planet Does This Man Live? Few Days Ago Hamas Accused Egypt of Torturing Palestinians in its Jails! The Pharaoh is Starving Gaza's Ghetto... 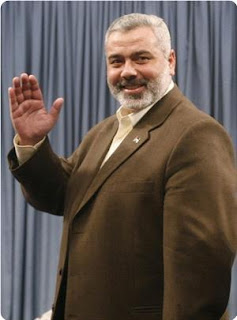 "GAZA, [PIC]-- The legitimate prime minister of the PA government Ismael Haneyya has affirmed on Thursday that the Palestinian-Egyptian relationship was and still strategic and brotherly, and couldn’t be affected with small differences in opinions.

"Some differences that could arise while discussing the details were similar to the differences inside the one home and inside the one family, and thus, they won't affect the deep relationship between the Palestinian and the Egyptian peoples who share the same destiny", asserted Haneyya in a press statement he issued in Gaza and a copy of which was obtained by the PIC.

However, Haneyya highlighted the plight of the Gaza Strip as a result of the crushing Israeli economic embargo imposed on it since one year, asserting that the blockade created "unprecedented human crises" in the Strip.

Nevertheless, Haneyya expressed hope that Egypt will exploit its position in the regional and international arenas to work for ending the embargo, and to open the vital Rafah crossing point which is under Egypt's control in order to bail the Palestinian people in Gaza Strip out of the "big Israeli jail", affirming that his government was very much concerned in bringing the Egyptian efforts in this regard to full success.

He also underscored that the daily contacts between his government and Egypt regarding a number of issues aim at alleviating the suffering of the Palestinian people in Gaza were continuing. "
***
Does this man still belong to Hamas? If so, when Hamas speaks with many conflicting and confused voices it adds to the confusion of the Palestinian message and strengthens the Pharaoh when he is under siege by his own people.
I know that this man is trying (as always) to act and sound "presidential"; but is this the time for "presidential" doublespeak??
Posted by Tony at 5:26 AM