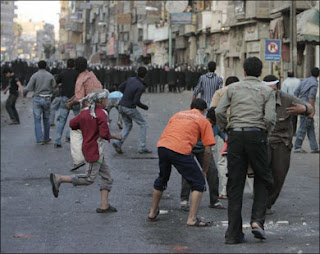 "Egyptians were voting on Tuesday in a municipal poll boycotted by the main opposition group the Muslim Brotherhood, against a backdrop of violent popular discontent over skyrocketing food prices. A 15-year-old Egyptian boy has died the day after being shot by police during a demonstration over the high cost of living in the Nile Delta city of Mahalla el-Kubra, a security official said.

"Ahmed Ali Hamad, 15, was shot during the night and was taken to hospital. He died there this morning," the official said. The Egyptian industrial city of Mahalla el-Kobra was calm but tense on Tuesday after a second day of clashes between police firing rubber-coated bullets and thousands of people protesting at the surging cost of living.

Thirty people, both civilians and police, were injured and 150 people have been arrested since Monday's demonstration in the Nile Delta city turned violent after protesters destroyed a portrait of President Hosni Mubarak, a security official said.

The vote was a shoo-in for the ruling National Democratic Party following a sweeping clampdown on the opposition, but the regime is under mounting pressure after two days of unrest centered on the city of Mahalla el-Kobra.
Only 30 percent of seats were being contested, the official MENA news agency said, as the NDP has already won 70 percent unopposed. Results will be announced on Wednesday and over five successive days.

Parties with presidential ambitions, including the banned opposition Muslim Brotherhood whose members sit in parliament as independents, now need the support of at least 10 members of every local council in at least 14 provinces to stand. The next presidential election is set for 2011, with many expecting the veteran 79-year-old Mubarak to stand down in favor of his son and senior NDP member Gamal Mubarak.

The Islamic party had been due to field just 21 candidates out of around 4,000 they originally put forward after a wide-ranging government crackdown left many would-be candidates behind bars or blocked from registering. In response, the Brotherhood announced a boycott and called on all Egyptians to follow suit."
Posted by Tony at 5:58 AM