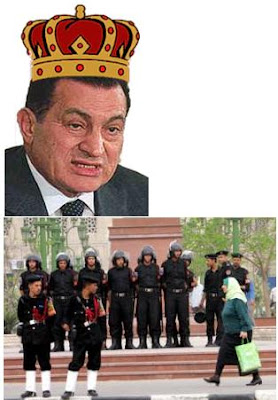 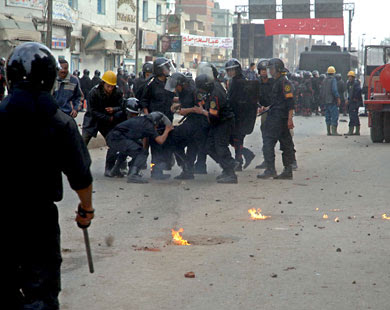 "Plans for a strike at Egypt's largest textile factory have collapsed after pressure from security forces and internal divisions among the workers, employees said.

Around the country, plans for a general strike on Sunday also fizzled out after a government warning that it would take firm action against anyone protesting or striking.

"Police in civilian clothes entered the factory in the middle of the night, and the strike failed due to intimidation," Karim al-Baheiri, a worker at the Misr Spinning and Weaving Company in the Nile Delta city of Mahalla told AFP.......

In Cairo, police and riot police trucks were deployed in downtown areas where protests had been planned.

On Saturday, the interior ministry threatened "immediate and firm measures against any attempt to demonstrate, disrupt road traffic or the running of public establishments and against all attempts to incite such acts".

A call for a general strike on Sunday had been circulating on the internet, via text messages and on the social networking site Facebook.

It is unclear who initiated the call which snowballed after some 25,000 employees at the Mahalla textile plant announced plans to go on strike from Sunday over low salaries and price hikes.

In a statement, the interior ministry condemned the actions of "illegitimate groups" in calling the general strike and warned that prison awaited those who planned to take part.

"We do expect this protest to have long term effects on the mobilisation of people, mobilising people is what brings down regimes. The aim now is to take this regime out of power," Rabab Al Mahdi, a political science professor at the American University in Cairo, told Al Jazeera. "
Posted by Tony at 10:23 AM