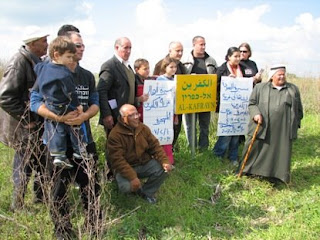 "With the 60th anniversary of Israel’s birth — and of the Palestinian Nakbah (catastrophe) — which are, of course the same event, almost upon us, I was reminded this week that April 9 was also the 60th anniversary of an event that has long epitomized the connection between the creation of an ethnic-majority Jewish state and the man-made catastrophe suffered by the Palestinian Arabs. That would be the massacre at Deir Yassein, a small village near Jerusalem where fighters of the Irgun, led by Menahem Begin, massacred up to 250 Palestinian civilians — in what later emerged as a calculated campaign of “ethnic cleansing,” using violence and the threat of violence to drive Palestinians to flee their homes and land, which were then summarily appropriated by the new state of Israel, which passed legislation forbidding the Palestinian owners from returning to their property. It was the events of 1948 that created the Palestinian refugee problem, and set the terms of a conflict that continues to define the State of Israel six decades later. No resolution of the conflict is possible without understanding the events of 1948 — something that precious few mainstream U.S. politicians do. The irony is that Israelis are far more likely to be familiar with the uglier side of their victory in 1948 than are their most enthusiastic supporters on these shores......"
Posted by Tony at 9:38 PM