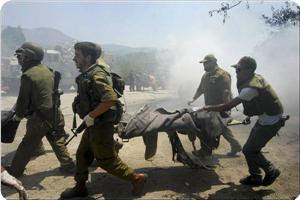 "KHAN YOUNIS, (PIC)-- The IOF command acknowledged on Wednesday that an officer was killed and two soldiers were wounded during an incursion late last night into eastern Khan Younis, south of the Gaza Strip.

Hebrew media said that the casualties were carried by an army chopper to Soroka hospital in Beer Sheba.

Sources in the Qassam Brigades, the armed wing of Hamas Movement, said that Israeli air force choppers were summoned to rescue the IOF special force that was attacked in the area."
Posted by Tony at 4:51 AM