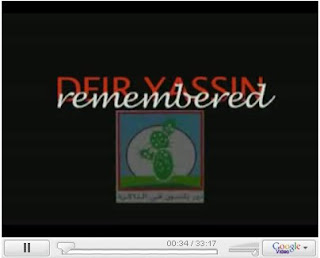 "Early in the morning of April 9, 1948, commandos of the Irgun (headed by Menachem Begin) and the Stern Gang attacked Deir Yassin, a village with about 750 Palestinian residents. The village lay outside of the area to be assigned by the United Nations to the Jewish State; it had a peaceful reputation. But it was located on high ground in the corridor between Tel Aviv and Jerusalem. Deir Yassin was slated for occupation under Plan Dalet and the mainstream Jewish defense force, the Haganah, authorized the irregular terrorist forces of the Irgun and the Stern Gang to perform the takeover.
In all over 100 men, women, and children were systematically murdered. Fifty-three orphaned children were literally dumped along the wall of the Old City, where they were found by Miss Hind Husseini and brought behind the American Colony Hotel to her home, which was to become the Dar El-Tifl El-Arabi orphanage. Visit http://www.deiryassin.org/"
Posted by Tony at 8:32 PM