Israeli soldiers continue to use civilians as human shields 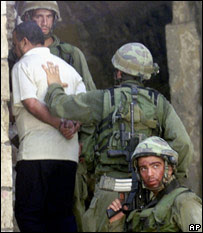 "Resident Sameer Abu Khweira from Khallit Al Amoud area in the northern West Bank city of Nablus reported on Wednesday that Israeli soldiers forced him and his brother to accompany them as the soldiers broke into two homes.

Sameer stated that on Wednesday approximately at 2:20 A.M, soldiers broke into his home and forced him and his brother Sa’id to walk in front of them as they broke into two houses in the area.

He added that he, his brother and their uncle had to stand in the cold weather for more than 30 minutes and were used as human shield as the soldiers broke into nearby houses, searched them and kidnapped four residents.

Sameer also said that this act subjected them to danger as the soldiers were carrying military acts while using them as Human Shields.

At least 23 residents were kidnapped by the army in Nablus on Wednesday at dawn and during early morning hours.

The Israeli Information Center For Human Rights in the Occupied Territories, B’Tselem, previously published a report which included testimonies from residents who were used as human shield in spite of a ban by the Israeli High Court of Justice.

One of the incidents took place in February 25, 2007, when Israeli soldiers used two children and their uncle as Human Shields. The two children, aged 11 and 15, in addition to a 25-year old resident, were forced to walk in front of the soldiers and their jeeps during the” Warm Winter” Offensive.

B’Tselem filed an appeal to the Israeli Military Prosecutor and demanded a probe into the issue.

On 6 October 2005, the High Court of Justice ruled that it was illegal for the army to use Palestinian civilians during military actions.

The decision was made on a petition that the Israeli Information Center for Human Rights in the Occupied Territories (B'Tselem) and six other human rights organizations filed in 2002.

The petition followed the army’s use of Palestinian civilians as human shields since the beginning of the second intifada, primarily during IDF operations carried out in Palestinian population centers, as occurred in Operation Defensive Shield, B’Tselem reported.

Using civilians is an international banned measure which constitutes a War Crime and is only banned by the Israeli law, yet the army uses civilians as human shields and ignores the international law. "
Posted by Tony at 5:22 AM