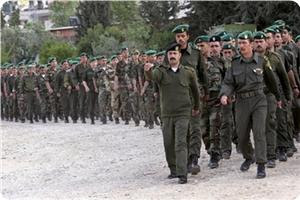 An Important Comment
By Khalid Amayreh in Occupied Jerusalem

"Israel, the Bush Administration and the Palestinian Authority (PA), headed by Mahmoud Abbas, are collaborating to build a depoliticized Palestinian security force whose main task and raison d’être will be to crush any popular uprising against a prospective “peace deal” imposed upon the Palestinians. The new force, whose members are being trained in neighboring countries, particularly Jordan, is being prepared to gradually replace the vast bulk of existing Fatah-dominated security forces in the West Bank.......

Many of the people being laid off, however, are in their early and mid 40s, which suggests that the PA is trying as much as possible to “dispose of” elements deemed “too patriotic” and “indoctrinated in hostility to Israel and Zionism.”

According to one cadet from the Hebron region, the force, whose members had to be thoroughly sifted by the Shin Bet, Israel’s chief domestic intelligence agency, is being trained in crowd-control tactics, conducting arrests, suppressing demonstrations as well as using rifles........

One disgruntled officer, a traditional Arafatist from Dura, near Hebron, intimated to this writer that “ignorance is the main and sought-after qualification of these recruits.” “The more ignorant, the more uneducated, the more stupid one is, the better qualified he will be viewed. They want blockheads, people whose brains are empty so that they would be able to handle them the way the want,” said the officer, who asked for anonymity for obvious reasons. “They are following the old adage which says ‘a good soldier doesn’t think, he only obeys orders’.” ......

“They are trying to brainwash a given cadet in a way that if and when they instruct him to shoot his father, for example, he would shoot father, mother and brother as well,” said the disgruntled officer from Dura.......

A few months ago, PA Interior Minister General Abdel Razak al Yahya told hundreds of trainees at the village of Jeftilik near Jericho that “your mission is not to fight Israel, your mission is to establish security and restore law and order.” “You are not here to confront Israel, the conflict with Israel has until now led nowhere. You must show the Israelis that you can do the job!!”

Earlier this year, more than 250 trainees were sent to Jordan for a four-month crash course sponsored and financed by the United States under the close supervision of Lieutenant General Keith Dayton.

Last year, Dayton botched up a plot conceived by his boss, Elliot Abrams, a neocon Jewish member of the Bush Administration, which would have seen forces loyal to Gaza’s former strongman Muhammed Dahlan topple and possibly crush the democratically-elected Hamas government. However, Hamas preempted Dahlan’s planned coup, by carrying a counter-coup during which Hamas’s smaller but more disciplined and better trained forces decisively defeated and ousted Fatah forces, thus consolidating its control over the entire Gaza Strip.

As a result of the ‘Gaza fiasco’, the Bush Administration reportedly sought a more ‘authentic alternative’ namely to establish a more bona fide Palestinian quisling force that would help the American-backed PA regime impose a possible ‘peace deal’ with Israel, presumably one that would allow Israel to annex large parts of the West Bank, including the bulk of East Jerusalem and surrounding Jewish colonies, in return for the creation of a deformed Palestinian entity, to be called a State, made up of disconnected Bantustans and truncated territories.

Hence, the ongoing efforts to create the new Palestinian Security Forces, whose main task is to repress and, if deemed necessary, kill Palestinians who dare oppose the liquidation of their just cause.

I asked Professor Abdul Sattar Qassem of the Najah National University in Nablus what could be done to thwart efforts to create a ‘quisling force’ whose main job is to repress Palestinians on Israel’s behalf. Qassem said he thought that the term ‘quisling’ accurately described the new force or forces being created and trained by the CIA.

“First of all we have to tell our sons who are being trained in Jordan that they are being trained to carry out immoral and unpatriotic acts, that they will be instructed to kill Palestinians in defense of Israel.” Qassem said he was certain that the PA was effectively a tool to liquidate the Palestinian cause in exchange for some money from the US.

He dismissed the PA claim that the new forces were necessary for re-establishing the rule of law and protecting the personal security of the Palestinian people. “I think we can uphold the rule of the law without sending our sons to be trained by the CIA to kill their own countrymen on Israel’s behalf. Let the PA take its hands off the justice system, let them rein in their thugs, and law and order would be restored immediately.”

“The problem, the main problem, is that we are dealing with a lying authority."
Posted by Tony at 5:14 PM