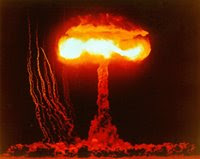 "National Infrastructure Minister Binyamin Ben-Eliezer said Monday, April 7: “An Iranian strike on Israel would result in an Israeli response that would devastate the Iranian nation.” On a visit to the national defense exercise’s situation room, Ben-Eliezer also warned: “An Initial strike on Israel would see hundreds of missiles hit us… all of Israel will be within range of Syrian and Hizballah missiles.”

DEBKAfile’s military sources note: In all of its 60 years, no Israeli leader has ever threatened to destroy another nation, however belligerent - even when Iranian president Mahmoud Ahmadinejad said Israel should be “wiped off the map.”

His words directly contradict the soothing statements made by prime minister Ehud Olmert and defense minister Ehud Barak that the defense exercise is in no way intended as a threat or an escalation of war tensions.

The minister’s wild rhetoric, apparently off the top of his head, could be interpreted as a threat of Israeli nuclear retaliation to a potential Iranian attack......."
Posted by Tony at 6:02 AM