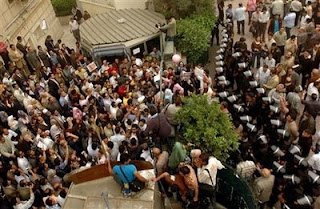 About 150 people were arrested and 80 were wounded in the gritty Nile Delta town of Mahalla el-Kobra, where riots broke out among residents and disgruntled workers at the largest textile factory in Egypt.

Protesters stormed city hall, burned tires in the streets, smashed chairs through shop windows and ran off with computers. At least two schools were set ablaze and facades of banks were vandalized, police said.

Nearly 100 others were arrested elsewhere across Egypt, officials said, as thousands skipped work and school and hundreds protested over the rising cost of food and deteriorating working conditions.

A call for a nationwide strike Sunday was the first major attempt by opposition groups to turn the past year's labor unrest into a wider political protest against the government of President Hosni Mubarak.

The strike and riots in the north came two days before key elections for local councils, causing jitters in the government, which last week lifted import duties on some food items in an effort to soften economic discontent.

The U.S.-backed government strongly warned citizens against participating in the strikes and demonstrations. Strikes and protests are illegal in Egypt, and protesters are often detained by Egyptian security forces.

Nearly 40 percent Egypt's 76 million people live below or near the poverty line of $2 a day. The prices of staples such as cooking oil and rice have nearly doubled in recent months, amid widespread shortages of government-subsidized bread.

Many Egyptians in Cairo responded to the calls for nationwide action by skipping work or school. Many shops were closed in the capital, and traffic was significantly lighter than usual in the normally car-clogged streets.

In an effort to thwart mass protests downtown, the government sent hordes of riot police to many of Cairo's main squares to intimidate people from showing up......."
Posted by Tony at 4:56 PM