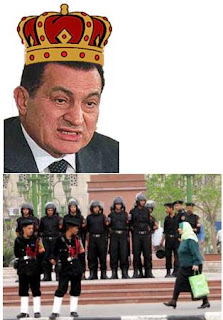 "....Others complain of their pitifully small incomes and shortages. In the last two months 11 people have died in bread queues, either from exhaustion, heart attacks, brawls or accidents.

"We are so badly off now we have to eat dogs and donkeys," shouts another middle-aged woman to raucous laughter from the jostling crowd. It sounds like an outlandish joke, but a butcher was prosecuted recently for selling adulterated spiced mincemeat in nearby Giza.

It looked as if this simmering crisis could trigger wider unrest. Last week, four people were killed and scores more injured and arrested in rioting in Mahalla, an industrial town in the Nile Delta, while a general strike left the normally teeming centre of Cairo eerily quiet. "The strike is against poverty and starvation," demonstrators shouted......

In Egyptian Arabic the word for bread is aish - life - and getting enough of it is a truly existential issue. "The word is pregnant with meaning," says the left-wing thinker Mohammed Sayyid Said. "It's the basic component of life."......

.....The UN defines Egypt as a middle-income country. But very little of this wealth is trickling down to the poor.

"Poverty in itself does not hurt," says Abdel-Wahhab al-Massiri, of the opposition Kefaya movement. "What hurts is the inequality in a country where 20 million people live in slums and you have some of the best golf courses in the world."......

The official line is that the crisis is manageable and that media coverage is exaggerated, especially on al-Jazeera TV. Analysts believe the unrest has rattled the government but can be contained, not least because the opposition is so divided. Its most powerful component, the outlawed Muslim Brotherhood, which was excluded from this week's local elections, did not back the strike, sitting on the fence for fear of being provocative. "There are plenty of carrots and plenty of sticks," says one diplomat. "It's still early in the game."

It is hard to predict how events will unfold. Fifty Kefaya members were detained without charge by state security officers after the strike, but "Facebook activists" - a new breed of young middle-class Egyptian protesters - have called for a new strike on May 4, Mubarak's 80th birthday, chosen as a reminder of how long he has been in power......."
Posted by Tony at 5:59 AM