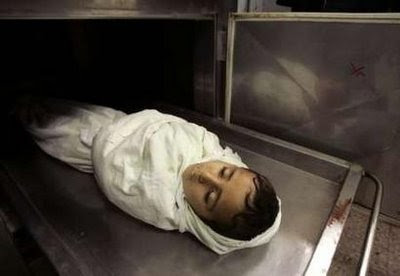 The body of a 5-year-old Palestinian boy, Abdullah Bhar, lies in hospital morgue after he was killed near al-Bureij refugee camp in the central Gaza Strip April 6, 2008. (Reuters)

"A 5-year-old Palestinian boy was killed on Sunday when an Israel Defense Forces shell exploded near his home in the al-Bureij refugee camp in the central Gaza Strip, Palestinian officials said.

Medical workers and militant groups said the boy, Abdullah Buhar, was killed during fighting between IDF soldiers and Palestinian militants in the Hamas-controlled Strip.

The medical workers, who examined the boy's body in a Gaza hospital, said he was killed by a shrapnel fragment from an IDF tank shell......."
Posted by Tony at 5:07 PM