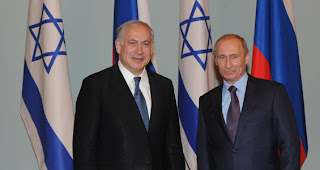 "Earlier this week, Binyamin Netanyahu, the Israeli prime minister, visited Moscow in his first official trip to Russia since taking office a year ago.

During the visit, Netanyahu urged Russia to support calls for new sanctions against Iran over its nuclear programme, highlighting the key role Russia plays in the nuclear standoff.

The Israeli-Russian relationship is one of the most complex and intriguing diplomatic entanglements in international politics. Its roots lie at the heart of Zionism as a practical settlement enterprise rather than a merely utopian idea.

Indeed, without events in Russia, it is hard to imagine Israel having come to be.....

"The Russians" are among the most important social and political blocs in Israel and have powerfully shaped Israeli politics towards a more extreme, nationalist agenda.

More broadly, Russia has acted to support, or at least not frustrate US and European/Nato polices and strategic goals in the Middle East, including vis-a-vis the Israeli-Palestinian and larger Israeli-Arab conflicts......

Similarly ambiguous is Russia's relationship with Iran, to whom Russia has provided key support for its nuclear industry and sells weapons. Russia also still sells weapons to Syria, and Russian-made weapons often make their way to Hezbollah and Hamas.

Yet Russia also purchases Israeli-made weapons, and the two countries share a similar outlook towards Muslim resistance groups attempting to evict them from territories they occupy......"
Posted by Tony at 4:32 AM