Family of US Activist Killed by Bulldozer to Sue Israel 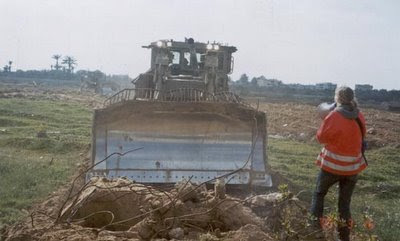 "24/02/2010 The family of US activist Rachel Corrie, run over by an Israeli bulldozer during a demonstration in Gaza in 2003, will sue Israel over her death, their lawyer said on Wednesday. The 23-year-old killed at the height of the 2000 Palestinian intifada, or uprising, became a symbol of foreign support for the Palestinian cause and the subject of a 2005 play based on her emails and diary.

"The state should take responsibility for the death of Rachel Corrie. We believe her killing was done intentionally or at least out of negligence and wrongdoing," Hussein Abu Hussein, the family's lawyer, told AFP. The family will be travelling to Tel Aviv for the trial, which will start March 10, Abu Hussein said.

Israel has allowed four activists who witnessed the incident to return to testify. The Palestinian doctor who pronounced Corrie dead has been summoned by the court but has not yet been given a permit to leave Gaza, he added.

Activists who witnessed Corrie's death said she and others were acting as human shields to prevent a house demolition in the Gaza border town of Rafah for more than two hours and were clearly visible to the bulldozer driver. "The whole time she was wearing a fluorescent jacket, as were her friends, and she had a megaphone," Abu Hussein said......."
Also, see this: