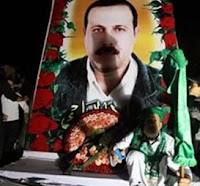 "The Syrian security forces apprehended Mohammad Nassar, a close associate of the assassinated Hamas leader Mohmoud Al Madbouh, on suspicion that he worked for the Israeli Mossad and provided them with vital information that led to his assassination in Dubai......

The Syrian security believes that Nassar provided Israel with detailed information on every movement Al Madbouh made, and his future plans. The statements are coherent with the statements of Dahi Khalfan Al Tamimi in charge of the investigation of Al Madbouh in Dubai, who said several days ago that members of Hamas are responsible for the assassination of Al Madbouh as they provided Israel with detailed information......"
Posted by Tony at 6:47 AM