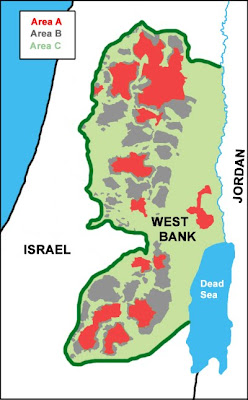 "IDNA, Occupied West Bank, Feb 27, 2010 (IPS) - Israel’s illegal occupation and continued expropriation of Palestinian land in the West Bank has left 2.5 million Palestinians living there with effectively less than 40 percent of the territory.....

According to the report Palestinian farming and construction is effectively prohibited in 70 percent of Area C, or approximately 44 percent of the West Bank, which is reserved mainly for the benefit of Israeli settlements.

A further 18 percent of the West Bank has been declared a closed military zone by the IDF for military training. This does not include the closed military areas around Israeli settlements.

Another 10 percent of the West Bank, overlapping with closed military zones, has been declared nature reserves by the ICA.

The restrictions in Area C adversely effect Palestinians living in Areas B and C too. Over 400 Palestinian communities have land in Area C. The majority are mixed between Area C and either Area A or B, or both.

The building restrictions have prevented Palestinian communities from expanding and being able to build new homes, hospitals and schools in parts of the West Bank falling under Area C. Many have, therefore, built "illegally".

As a result nearly 3,000 Palestinian-owned structures in Area C have been demolished by the ICA in the last 12 years with hundreds more under threat of demolition......"
Posted by Tony at 6:52 AM