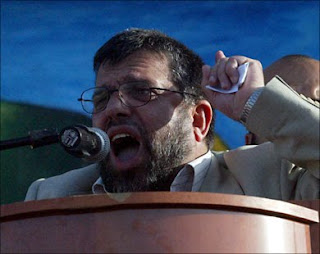 JERUSALEM - The son of a leading Hamas figure, who famously converted to Christianity, served for over a decade as the Shin Bet security service's most valuable source in the militant organization's leadership, Haaretz has learned.
Mosab Hassan Yousef is the son of Sheikh Hassan Yousef, a Hamas founder and one of its leaders in the West Bank. The intelligence he supplied Israel led to the exposure of a number of terrorist cells, and to the prevention of dozens of suicide bombings and assassination attempts on Israeli figures.
The exclusive story will appear in this Friday's Haaretz Magazine, and Yousef's memoir, "Son of Hamas" (written with Ron Brackin) will be released next week in the United States. Yousef, 32, became a devout Christian 10 years ago and now lives in California after fleeing the West Bank in 2007 and going public with his conversion.
Yousef was considered the Shin Bet's most reliable source in the Hamas leadership, earning himself the nickname "the Green Prince" - using the color of the Islamist group's flag, and "prince" because of his pedigree as the son of one of the movement's founders.
During the second intifada, intelligence Yousef supplied led to the arrests of a number of high-ranking Palestinian figures responsible for planning deadly suicide bombings. These included Ibrahim Hamid (a Hamas military commander in the West Bank, Marwan Barghouti (founder of the Fatah-linked Tanzim militia) and Abdullah Barghouti (a Hamas bomb-maker with no close relation to the Fatah figure). Yousef was also responsible for thwarting Israel's plan to assassinate his father.
Posted by Zarathustra at 9:49 AM