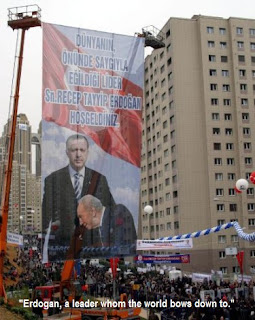 Paul Wooward
In an interview with the Spanish newspaper El Pais, published on Monday, Turkey’s Prime Minister Recep Tayyip Erdogan said that the Davos incident in which he clashed with Israel’s President Shimon Peres a year ago soon after Israel’s war on Gaza, led to a new Turkish approach to foreign policy.

“That opened a new approach to foreign relations,” he said. “We have a philosophy of strength. It is a foreign policy with a backbone.”
War in Context
Posted by thankgodimatheist at 3:39 AM