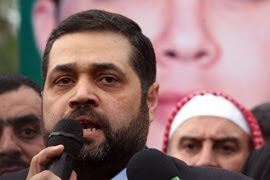 "....Al Jazeera interviewed Osama Hamdan, Hamas' representative in Lebanon, and asked him about the al-Mabhouh's assassination and other issues.....

Do you think it would be more beneficial if some other mediator steps in and helps Egypt in its efforts to bring Hamas and Fatah to reconciliation?

Definitely. The thing is, the more Arab countries are involved the stronger they get in resisting pressure. The other thing is, those countries as a league can be more effective [still counting on that totally discredited and impotent League?]in supervising and overseeing the implementation of the reconciliation agreement's terms when it takes place.

At the end of the day, if a mediator cannot achieve a mission for almost a year, then some aid should be seriously considered......

But do you not think that your strong ties with Iran are blocking stronger bonds between you and many Arab states?

I think the Palestinian cause needs support, from Arabs, Muslims and maybe the whole world. The Iranian support should be a motive for Arabs to provide even greater support.

The Iranian role in Iraq was not very pleasant, many Arabs have become cynical about Iran; How can Iran be supportive to some Arabs like Palestinians and aggressive against others like Iraqis?

It is at the core of our principles that we reject any threat to the national security of any Arab country. Supporting Palestinians should not justify wrongdoing to any other Arab country.

It has been more than a year since Barack Obama took over as US president. Has there been any change in the US approach toward the Palestinian cause?

Obama’s approach was positive in the beginning. Many were under the impression that he would bring some sort of change. Speaking now, Obama has failed to bring any sort of change and that led to a state of depression among Palestinians and parties involved in the Israeli-Palestinian conflict.

The big disappointment is that Obama's administration has started to follow George Bush’s approach."
Posted by Tony at 4:06 AM