How I escaped Mossad's clutches 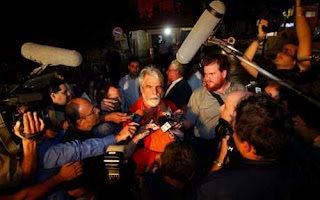 The Telegraph
Via Angry Arab

"If Mossad was behind the murder of Mahmoud al-Mabhouh in a Dubai hotel last month it should shock nobody. From my experience of the Israeli intelligence agencies, it is not their ruthlessness that is so remarkable but their disdain for international public opinion and tendency to take short cuts.

Hit teams dispatched by the spymasters of Tel Aviv have been surprisingly clumsy in exercising their licence to kidnap or kill around the world. Many operations have been botched, causing huge embarrassment to friendly countries.

My experience of them happened six years ago after I had gone to Israel on behalf of the BBC and The Sunday Times. The aim was to get the first interview with nuclear whistleblower Mordechai Vanunu on his release after 18 years in jail, 11 of them spent in solitary confinement. I ended up being accused of nuclear espionage myself.

In 1986, I had exposed Israel’s nuclear weapons programme based on Vanunu’s eyewitness testimony of his country’s underground nuclear weapons plant where he had worked as a technician. He had then been kidnapped by Mossad, returned to Israel and convicted of treason and espionage......."
Posted by Tony at 6:40 AM