With 1000 US Soldiers Dead in Afghanistan, Time to Revive the Anti-War Agenda 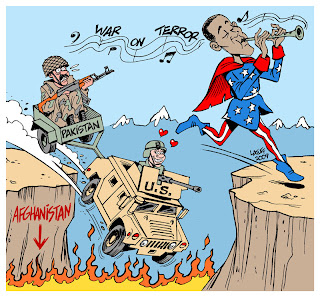 ".....Unfortunately, the anti-war sentiment lacks visibility. Gone are the days when the peace movement could turn out hundreds of thousands of people. The Obama administration not only led to a surge in Afghanistan, but it sucked the air out of the anti-war movement. United for Peace and Justice, once a vibrant coalition of over 1,300 groups with large offices in New York and a dozen staff, has become a network based on volunteers, and grassroots peace groups across the country have folded.

But March promises to be a revival of sorts. The ANSWER coalition is gearing up for the first significant anti-war marches since Obama took office, planned for the March 20 anniversary of the Iraq war. Progressive Democrats of America, along with groups like CODEPINK, have been encouraging people to gather for a brown bag lunch at congressional offices in districts across the country. With the message of Healthcare not Warfare, there are now over a hundred monthly lunches outside congressional offices. And a group called Peace of the Action is organizing a campout on the DC mall starting March 13.

As the fighting surges, the spending on war surges and the deaths surge, it's time for the U.S. peace movement to regather its energy and push the anti-war agenda back onto the national scene."
Posted by Tony at 6:21 AM