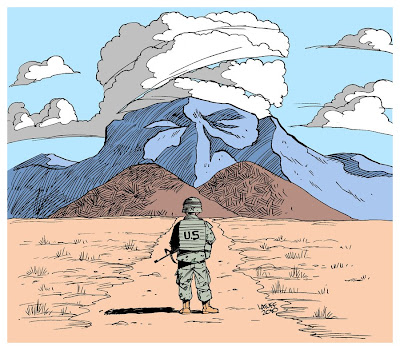 ".......In Afghanistan incidents like the bombing of civilians in Uruzgan will inevitably be highly publicised, not least because the government of President Hamid Karzai is seeking to burnish its nationalist credentials by protesting volubly against the loss of civilian lives. This is in sharp contrast with Iraq where, at the height of the fighting between 2004 and 2007, the Iraqi government would happily confirm that civilian dead were insurgent fighters.

The fact that these airstrikes took place in Uruzgan, from which the 2,000-strong Dutch contingent is being withdrawn, shows that no Nato power contributing forces can keep itself politically and militarily on the margins of the escalating conflict.

Meanwhile the curtailment in the use of air power by Nato will mean that more foreign troops will be needed to make up the loss in firepower just as support for the Afghan venture is waning in the countries which supply them."
Posted by Tony at 3:52 AM