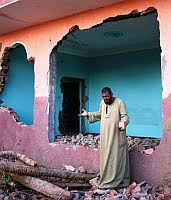 "I will not be forced out of my home without fair compensation," the village elder vows as a hydraulic hammer reduces his neighbor’s brick home to rubble. "If they try to destroy my house I will lock myself inside it."

Khodari is the patriarch of an extended family of 14 who live in the two-storey house, its exterior walls adorned with paintings of his pilgrimage to Mecca four years ago. He has defied a municipal eviction order and demands "equitable compensation" before vacating the home he claims is built on land his family has occupied for over 200 years.

"For the past month the government has cut off our water and electricity during the day to pressure us to leave," he says. "Then they came a week ago and told us we must go. Go where? Into the streets, the desert… to Israel?".

Hundreds of low-income families have lost their homes since Luxor city officials approved a controversial plan to excavate an ancient processional route and develop it as a key tourist attraction. Buried for centuries under soil and houses, the 2.7-kilometer ‘Avenue of Sphinxes’ once connected the temples of Luxor and Karnak in what was then the ancient city of Thebes.......

There is also concern that the master plan will result in the ‘Disneyfication’ of the ancient Egyptian city. Tourism developers are mulling plans for pharaonic-themed tourist villages and the reenactment of ancient processions along the sphinx avenue. Officials even flirted with the idea of a monorail to ferry around tourists......

When completed, the sphinx avenue will generate tourism revenue through ticket sales, tour fees and increased hotel guest spending. While officials are reluctant to put a figure on it, one tourism expert estimates the new attraction should bring in at least 50 million dollars a year.

By contrast, the government has allocated just over 5 million dollars for one-time compensations to relocated families. "It really makes the government’s compensation package look pathetic," says one man whose home is slated for demolition. "
Posted by Tony at 4:37 AM