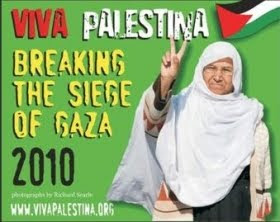 "British Legislator, George Galloway, stated that Viva Palestina is preparing to send another convoy filled with humanitarian aid to the impoverished Gaza Strip. Convoy members from different countries around the world, will be sailing in June.

Galloway added that Viva Palestina will establish a summer school for international activists, and all activists working for the Palestinian cause. The school will start its work next July.

His statement came during an activity held by the Palestinian Forum of Britain (PFB) , Muslim Association of Britain (MAB) , and the Islamic Unity Forum (IUF)....."
Posted by Tony at 6:57 AM