Sayyed Khamenei to Palestinian Leaders: Resistance Is the Key. However, US Occupation of Iraq Should NOT be Resisted, but Welcomed! 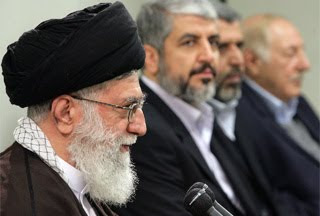 "27/02/2010 The Leader of the Islamic Republic Ayatollah Sayyed Ali Khamenei told Palestinian resistance chiefs on Saturday that sustained resistance was the key to liberating their land.

"Palestine, surely and definitely, will be freed by sustained resistance from the people of Palestine and by maintaining unity among jihadist groups," Khamenei said.

He met Hamas political leader Khaled Meshaal, Islamic Jihad leader Ramadan Abdullah, and the head of the Popular Front for the Liberation of Palestine - General Command (PFLP-GC) Ahmed Jibril, all of whom live in exile....."
Posted by Tony at 7:12 AM