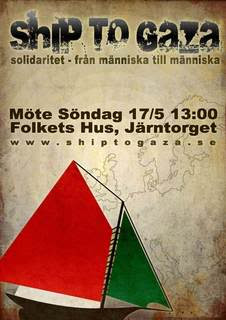 "As groups and organizations across Europe plan for a solidarity flotilla of aid ships to Gaza, the organizing includes a group of Jews in Germany, some of them Holocaust survivors, who hope to show their support for the people of Gaza with their humanitarian aid ship.

In their press release, the group states, “We are a group of German Jews who want to send a ship with goods and musical instruments to Gaza. We intend to cooperate with a European project that is sending supplies in the spring of 2010. We are acquiring a ship, loading it up in Germany, then picking up passengers (Jewish and non-Jewish, German and non-German) at a Mediterranean port.”

They say that among the goods being shipped will be urgently needed things like medicines, baby food, bedding, children’s clothes, school materials; also painting equipment and especially musical instruments.

In addition, the ad-hoc group of German Jews working to bring solidarity aid to Gaza say they believe cement is not the only thing necessary for rebuilding, writing in their statement, “we call on our politicians to provide these urgently needed building materials! – but also things to help cure the soul.

“We hope our musical instruments will contribute a little towards this. Our schools can also make a very significant contribution: Children in Gaza are prevented from studying through lack of materials. This is why we are looking for schools to donate school material. Later perhaps we can work on twinning schools or classes.”

The German Jewish ship is part of several dozen solidarity aid boats being planned as part of a flotilla to break the nearly 3-year long siege of the Gaza Strip by Israel and Egypt. The siege has prevented the entry of nearly all basic medical supplies, construction supplies, fuel and food supplies."
Posted by Tony at 7:01 AM