"The ground is shifting": An interview with comedian Ivor Dembina 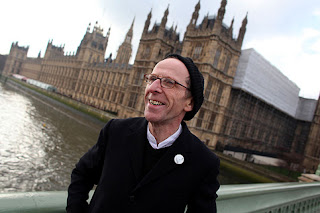 "......Dembina is also convinced that opinions really are shifting in the British Jewish community, and that the combined force of protests, cultural contributions and public debate are genuinely affecting public feeling on Palestine. What he calls the "ruse" of accusing any critic of the State of Israel of being anti-Semitic has been "burnt out.".....

But, Dembina warns, this can also make the Zionist lobby all the more dangerous. "You're left with a rump of very angry people who are used to getting their own way. Things have to be handled very carefully in the months and years ahead," he says, noting the State of Israel's skill at playing a "long game," thinking in cycles of "30, 50, 100 years," quietly carving out one piece of land after another.

Despite that potentially gloomy assessment, Dembina is optimistic, citing the decades over which a global consensus developed that "something was wrong and it had to change" in South Africa. "In the anti-Zionist camp, we are winning," he insists, "Just slowly.""
Posted by Tony at 6:25 AM