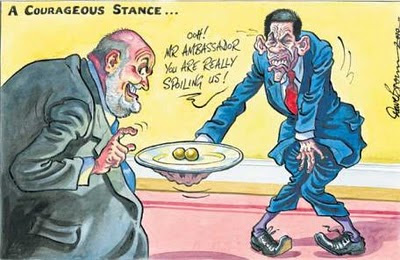 (Left: David Miliband and the Israeli ambassador in London)

While the critics bemoan the clumsy Mossad job, making it harder for Western powers to provide Israel with diplomatic cover for its operations abroad, the fundamental issue is never addressed: The Mossad’s acquisition and alteration of official British, French, German and Irish passports of dual Israeli citizen’s underscores the cynical and sinister nature of Israel’s exploitation of its dual citizens in the pursuit of its own bloody foreign policy goals. Mossad’s use of genuine passports issued by four sovereign European nations to its citizens in order to murder a Palestinian in a Dubai hotel room raises the question of to whom ‘dual’ Israeli citizens really owe their allegiance and just how far they are willing to go in defending or promoting Israel’s overseas assassinations.

Thanks to Israel’s use of British passports to enter Dubai and murder an adversary, every British businessperson or tourist traveling in the Middle East will be suspected of links to Israeli death squads. With elections this year and the Labor and Conservative parties counting heavenly on Zionist millionaires for campaign funding, it remains to be seen whether Prime Minister Gordon Brown will do more than whimper and cringe!"
Posted by Tony at 9:02 AM