All's fair in cuts and war 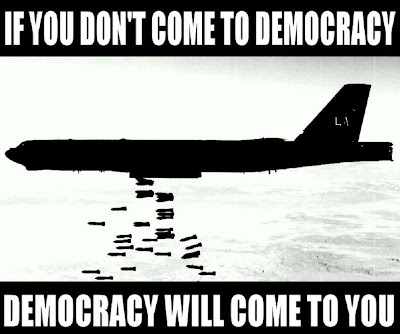 Thank goodness Osborne didn't cut 'defence' spending – where would we be without our fear of hidden enemies under the bed?

"Did you notice there was one department that didn't figure in the budget cuts?

Yes, it was the Ministry of Defence. Which is pretty surprising, since the UK spends more on its military than Russia. In fact, according to the Stockholm International Peace Research Institute, last year it was the world's third biggest spender on military matters. We can be proud that our country, in 2009, a time of economic chaos, managed to spend $69bn on warfare – I'm sorry: "defence".

Only China and the US spent more last year than us. Isn't that something?

Now you may ask: "Who are our enemies, apart from those we've created by invading Iraq and Afghanistan?" After all, fundamentalist Islam wasn't a problem before we started attacking Islamic countries – even secular Islamic countries like Saddam's Iraq. Well the answer is: "We don't know."

But just because we don't know doesn't mean we don't have enemies. They could be anywhere. Hiding under our beds. Peering out of our wardrobes. The world is full of potential enemies and the key thing is to get them before they get us, like the Americans do.....

So giving up Trident isn't going to benefit bankers or hedge-fund managers, is it? And what's even worse, it may make the country safer instead of more vulnerable, which is bad news, if you want to instil fear of terrorism into the population....."
Posted by Tony at 4:18 AM