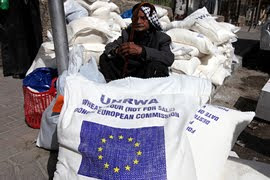 "Children living in the poorest parts of the West Bank face significantly worse conditions than their counterparts in Gaza, a study conducted by an international youth charity has found.

The report by Save the Children UK, due to be released on Wednesday, says that families forced from their homes in the West Bank are suffering the effects of grinding poverty, often lacking food, medicine and humanitarian assistance.

The European Commission funded study found that in "Area C"- the 60 per cent of the West Bank under direct Israeli control - the poorest sections of society are suffering disproportionately because basic infrastructure is not being repaired due to Israel's refusal to approve the work.

Homes, schools, drainage systems and roads are in urgent need of repair, but instead of work being allowed, families are being forced to live in tents and do not have access to clean water....."
Posted by Tony at 2:47 AM