"The Obama administration has been rapidly expanding its offensive capacity in the African island of Diego Garcia, claimed by Britain, which had expelled the population so that the US could build the massive base it uses for attacking the Middle East and Central Asia. The Navy reports sending a submarine tender to the island to service nuclear-powered guided-missile submarines with Tomahawk missiles, which can carry nuclear warheads. Each submarine is reported to have the striking power of a typical carrier battle group. According to a US Navy cargo manifest obtained by the Sunday Herald (Glasgow), the substantial military equipment Obama has dispatched includes 387 “bunker busters” used for blasting hardened underground structures. Planning for these “massive ordnance penetrators,” the most powerful bombs in the arsenal short of nuclear weapons, was initiated in the Bush administration, but languished. On taking office, Obama immediately accelerated the plans, and they are to be deployed several years ahead of schedule, aiming specifically at Iran.

“They are gearing up totally for the destruction of Iran,” according to Dan Plesch, director of the Centre for International Studies and Diplomacy at the University of London. “US bombers and long range missiles are ready today to destroy 10,000 targets in Iran in a few hours,” he said. “The firepower of US forces has quadrupled since 2003,” accelerating under Obama. 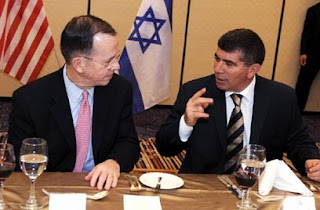 The Arab press reports that an American fleet (with an Israeli vessel) passed through the Suez Canal on the way to the Persian Gulf, where its task is “to implement the sanctions against Iran and supervise the ships going to and from Iran.” British and Israeli media report that Saudi Arabia is providing a corridor for Israeli bombing of Iran (denied by Saudi Arabia). On his return from Afghanistan to reassure NATO allies that the US will stay the course after the replacement of General McChrystal by his superior, General Petraeus, Chairman of the Joint Chiefs of Staff Admiral Michael Mullen visited Israel to meet Israel Defense Forces Chief of Staff Gabi Ashkenazi and senior Israeli military staff along with intelligence and planning units, continuing the annual strategic dialogue between Israel and the U.S. in Tel Aviv. The meeting focused “on the preparation by both Israel and the U.S. for the possibility of a nuclear capable Iran,” according to Haaretz, which reports further that Mullen emphasized that “I always try to see challenges from Israeli perspective.” Mullen and Ashkenazi are in regular contact on a secure line....."
Posted by Tony at 1:22 PM