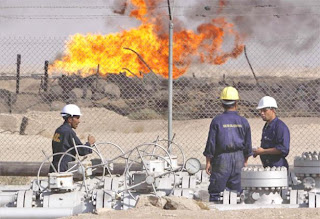 "The map of the world's main energy suppliers is about to change as Iraq's oil output quadruples over the next 10 years according to new forecasts. Iraq will eventually displace Saudi Arabia as the world's biggest exporter, experts predict, giving Baghdad [meaning Washington, of course.] crucial influence over the future price of oil....."
Posted by Tony at 4:18 AM