Lebanon Wins Economically if Palestinians are Granted Right to Work 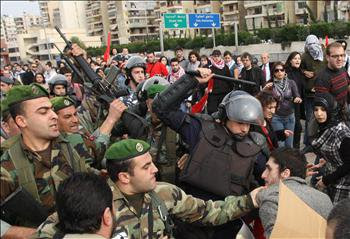 Shatila Palestinian Refugee Camp
"“These are humanitarian, social and ethical duties, and the Lebanese state must assume the responsibility of providing them to our Palestinian brothers and sisters. Lebanon will not dodge these duties, which must be crystal-clear, and not be subject to any misinterpretation. The international community has to bear also the responsibility that our Palestinian guests will have the right to go back to their homeland: Palestine, with Jerusalem as their capital.”
Prime Minister Saad Hariri during the Lebanese-Palestinian Dialogue Committee (LPDC) meeting at the Grand Serail, June 29, 2010

Handicapping the Parliamentary Vote to grant Civil Rights to Palestinian Refugees
Votes needed to Pass: 65 MP votes in favor out of 128
As of July 2, 2010:
Firmly in favor: 13
Firmly opposed: 16
Leaning towards voting in favor: 41
Leaning towards voting against: 58
......
WHAT LEBANON’S ECONOMY NOW ENJOYS FROM PALESTINIANS WILL INCREASE
The Washington DC and Beirut based Palestine Civil Rights Campaign and those in Lebanon and internationally who are working to secure civil rights for Palestinian refugees advocate a rights-based approach based on international legal norms and universal moral and religious teachings. While these arguments are sufficient, it is also worth emphasizing the benefits that the Lebanese economy will reap from access to the Palestinian refugee labor market.

At the time of their exodus, only four years after Lebanon’s independence from the French in 1943, Palestinian assets brought into Lebanon were estimated at four times the value of the Lebanese economy. Ever since, periods of economic expansion have greatly benefited from Palestinian capital being invested in the country.

As it is now, Palestinian refugees contribute massively to the Lebanese economy....."
Posted by Tony at 3:40 AM