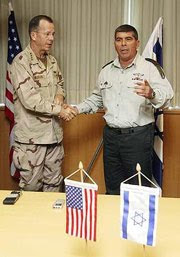 "Chairman of the US Joint Chiefs of Staff Admiral Mike Mullen warns that any military action against Iran would be "incredibly destabilizing" to the region.

The US and Israel understand that the use of force against Iran would be "incredibly destabilizing," Mullen said addressing the Aspen Security Forum on Monday.

The top US military official, however, renewed allegations that Iran is pursuing nuclear weapons under the guise of peaceful nuclear work and said that that there is "no reason to trust" Iran.

According to Mullen, who had previously threatened Tehran with military options, Iran's access to nuclear weapons would be "incredibly dangerous" for the Islamic Republic.

The top US commander also expressed skepticism that the exertion of sanctions would be an effective tool to make Iran relinquish its nuclear activities.

Mullen's statements came in the wake of the estimations of CIA Director Leon Panetta who said on Sunday that he "thinks" Iran was in possession of enough low-enriched uranium to produce two atomic weapons within two years....."
Posted by Tony at 4:14 AM