Break The Siege Now! The Siege of Palestinian Refugees in Lebanon! Freedom Flotilla (Caravan) Anyone? 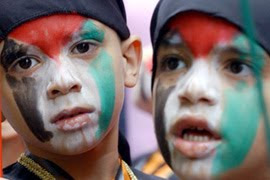 The two faces of Lebanon

"Thousands of Lebanese and Palestinian activists are marching in Beirut today in support of social and economic rights for the more than 400,000 Palestinians living in the country's 12 refugee camps.

A debate in the Lebanese parliament over granting civil rights - apart from the right to vote and naturalisation - to Palestinian refugees has threatened to polarise the country along roughly - but not exclusively - religious lines.

Maronite Christian parties have temporarily come together to oppose the move, citing their fear that the "integration of Palestinian refugees" into Lebanese society would tip the demographic balance in favour of Muslims, as well as straining Lebanese resources and the country's job market.

Predominantly, but not exclusively, Muslim, liberal, nationalist and pan-Arab parties have joined hands with Hezbollah in pushing to allow Palestinians the right to own property and work in the country that has hosted them since the 1948 establishment of Israel.....

Maintaining the status quo of practically besieged Palestinian refugees is no longer sustainable or acceptable.

And it is no longer feasible to portray a modern, open and liberal face of Lebanon while maintaining an effectively racist and discriminatory set of laws that isolate the country's Palestinian residents and deprive them of basic human rights......"
Posted by Tony at 5:05 AM