These strikes are good for China – and for the world 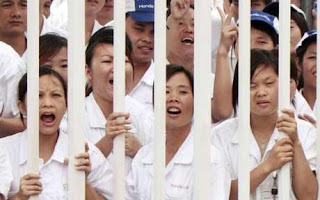 "Something is stirring in the workshop of the world. For weeks, strikes and protests have been breaking out across the coastal regions which have been the engine of China's emergence as an economic power and have unleashed an avalanche of bargain-basement consumer goods on the rest of the globe. While trade unions in Europe are taking industrial action against cuts in wages, pensions and jobs, low-paid workers in China have been striking against rampant exploitation, and winning double-digit pay rises.....

It's a powerful challenge to the Washington consensus that has driven economic policy for a generation. A growing Chinese economy also offers a welcome antidote to continued stagnation or recession in the western world, especially if the current switch to consumption continues. Strikes against poverty wages can only help. When Alan Greenspan, former chairman of the US Federal Reserve, hailed Chinese cheap labour as a lever to hold down global labour costs, he was highlighting what has been a burden on workers across the world. Sustainable, growing Chinese living standards should also strengthen the prospects of progressive domestic change. These strikes are good for China and good for the world."
Posted by Tony at 4:02 AM