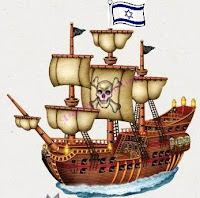 The attack on the Gaza relief flotilla jeopardizes Israel itself.

"Israel’s botched raid against the Gaza-bound humanitarian flotilla on May 31 is the latest sign that Israel is on a disastrous course that it seems incapable of reversing. The attack also highlights the extent to which Israel has become a strategic liability for the United States. This situation is likely to get worse over time, which will cause major problems for Americans who have a deep attachment to the Jewish state.

The bungled assault on the Mavi Marmara, the lead ship in the flotilla, shows once again that Israel is addicted to using military force yet unable to do so effectively. One would think that the Israel Defense Forces (IDF) would improve over time from all the practice. Instead, it has become the gang that cannot shoot straight.... "
Posted by Tony at 4:24 AM