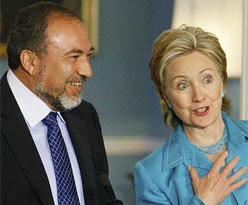 Advice to Lieberman: Go Back to Moldova, Where You Came From!

"NAZARETH // Avigdor Lieberman, Israel’s far-right foreign minister, set out this week what he called a “blueprint for a resolution to the conflict” with the Palestinians that demands most of the country’s large Palestinian minority be stripped of citizenship and relocated outside Israel’s future borders.

Warning that Israel faced growing diplomatic pressure for a full withdrawal to the Green Line, the pre-1967 border, Mr Lieberman said that, if such a partition were implemented, “the conflict will inevitably pass beyond those borders and into Israel”.

He accused many of Israel’s 1.3 million Palestinian citizens of acting against Israel while their leaders “actively assist those who want to destroy the Jewish state”.

Mr Lieberman’s Yisrael Beiteinu party campaigned in last year’s elections on a platform of “No loyalty, no citizenship” and has proposed a raft of loyalty laws over the past year targeted at the Palestinian minority....."
Posted by Tony at 9:37 AM