The Land Where Theories of Warfare Go to Die 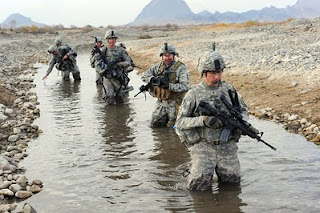 By Robert Dreyfuss
TomDispatch
".....Much of the time, our wars may hardly exist for us, but in the age of celebrity, our generals do -- exactly because they become celebrities. When Barack Obama picked Stanley McChrystal as his Afghan war commander, the general was greeted by the media as little short of a savior. He was, we were told, superhumanly fit, utterly austere (eating only one meal a day), and -- strangely for the man who was to oversee a protect-the-people counterinsurgency war -- had spent his professional life in the deepest shadows of counter-terror warfare at the head of groups of hunter-killer special operations forces. His was the darkest of legacies, but he was greeted like Superman....."
Posted by Tony at 6:45 AM