Abused scholar: US police conspiring against me 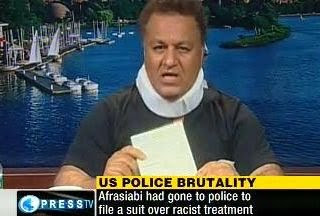 Note: Kaveh Afrasiabi writes for Asia Times and I have posted many of his articles here on PP.

"The following is a rush transcript of Press TV's exclusive interview with Iranian-American university professor and senior political analyst Kaveh Afrasiabi, who was abused by the police in Cambrige, Massachusetts.

Press TV: Dr. Afrasiabi, first tell us why the police arrested you and what happened on that day?....

And to have all this information and falsehoods circulating about the violent racist behavior by Cambridge police against me is just horrible.

I'm and internationally-recognized author and my forthcoming book is actually about my legal battle with Harvard, 'Looking For Rights At Harvard'.

[The book is about my legal battle against] two Harvard university police officers and its administration at the United State's Supreme Court -- the first ever in the entire history.

And there may be a connection between the Harvard incident and this by Cambridge police. Because they singled me out, put me alone in a van separated from the other cellmates, drove recklessly at full speed, came to a [sudden] full stop with my hands tied behind my back and I had no way of holding on to anything and I went flying into a metal shied and I could've been killed right then and there and maybe that was the intention -- to kill me.

This whole bizarre thing about denying that they arrested me and the censorship by Cambridge newspapers is just awful."
Posted by Tony at 3:28 AM