Why Petraeus won't salvage this war 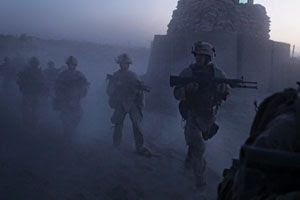 "As Gen. David Petraeus prepares for his next command, his supporters are hoping he can rescue a failing war for the second time in just a few years. But both the dire state of the war effort in Afghanistan and his approach to taking command in Iraq in early 2007 suggest that Petraeus will not try to replicate an apparent -- and temporary -- success that he knows was at least in part the result of fortuitous circumstances in Iraq. Instead he will maneuver to avoid having to go down with what increasingly appears to be a failed counterinsurgency war.....
The coming months will test Petraeus's ability to navigate the treacherous politics of command of a war that can be managed only as a bloody stalemate at best. Salvaging the war could now be beyond his means, but the general may yet find a way to save his own reputation."
Posted by Tony at 6:23 AM