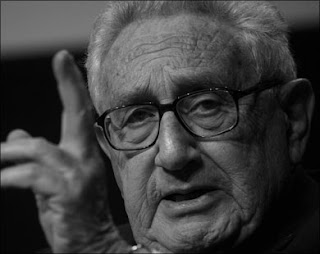 "Henry Kissinger, the former US secretary of state, has warned that Washington’s plan to begin handing over responsibility to national forces in Afghanistan in July next year “provides a mechanism for failure”.
In an interview with the Financial Times after President Barack Obama’s decision to remove General Stanley McChrystal as commander of US and Nato forces in Afghanistan, Mr Kissinger said the public “must be prepared for a long struggle” in what is already the US’s longest war......

Mr Kissinger added that fighting the Taliban until it was reduced to impotence "would take more time than the American political system would permit".... "
Posted by Tony at 9:24 AM