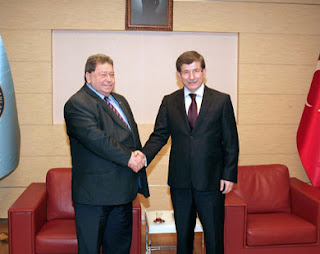 "03/07/2010 An international inquiry into the Israeli raid on the Gaza-bound flotilla may hurt the Turks – This is the message that US President Barack Obama has conveyed to Turkish Prime Minister Recep Tayyip Erdogan, Turkish sources told the London-based al-Hayat newspaper.

Saturday's report said Obama told Erdogan that "such an inquiry commission may lead to accusations against several passengers on the Marmara ship, or members of the IHH organization and Turkey must know that its request could turn into a double-edged sword."

Turkish sources told the paper that the meeting between Obama and Erdogan on the sidelines of the G20 summit in Canada paved the way for the secret meeting between Israel's Industry, Trade and Labor Minister Binyamin Ben-Eliezer and Turkish Foreign Minister Ahmet Davutoglu in Brussels.

According to the Turkish sources, "Obama conveyed promises and calming messages to Turkey, in an attempt to convince Israel's prime minister, Netanyahu, in their upcoming meeting next Tuesday, to accept the Turkish demands."

The sources said Ben-Eliezer noted that Israel could apologize to the families of some of the activists killed in the flotilla raid, but not to all of them, as some of them were affiliated with Hamas.

The sources added that Ben-Eliezer asked that Turkey give the internal Israeli probe into the raid a chance, or include its report in the international commission's report, which Israel will not officially take part in or work with directly......"
Posted by Tony at 7:35 AM