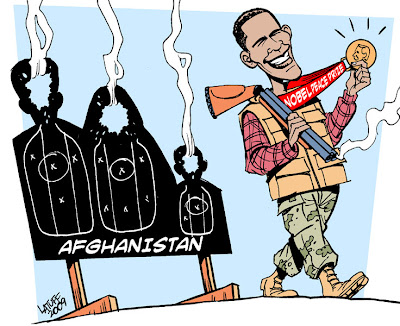 "Everyone is shocked – shocked! – that the indiscretions of Gen. Stanley McChrystal failed to provoke a general reevaluation of our course in Afghanistan, rather than merely a review of who’s in charge of it. I find this shocking.
After all, as I recall, Obama ran on ramping up the war on the Afghan front, and even threatened to invade Pakistan, two campaign promises he has kept.
Furthermore, he is committed to prosecuting the war in Afghanistan and now Pakistan on a scale that even the nuttiest neocons never dared suggest, a “nation-building” project that is nothing less than the construction of a US colony, or satrapy, from scratch. McChrystal went into Afghanistan declaring he was ready to roll out a “government in a box,” i.e., a puppet regime such as the Japanese set up in Manchuko in 1931. This is the CNAS-Obama-ite “national security” doctrine in action: pretending to be the Viet Cong while reenacting every mistake the US ever made in Vietnam, starting with getting involved to begin with.....

In a move that would have had the Hollywood-Huffington left screaming bloody murder if done by the Bush administration, Team Obama is busy building the foundations of a full-fledged US colony in Afghanistan, and Iraq as well (where a “residual” force will stay long after the official “withdrawal.”) With the alleged discovery – or, rather, rediscovery – of untold mineral riches in the mountains of the Hindu Kush, the Money Power and its vassals in government have added incentive to push for this wacky “nation-building” strategy. That infrastructure Uncle Sam keeps promising the Afghan people sure will come in handy when it’s time to bring all that lithium to market....."
Posted by Tony at 4:15 AM