The Gaza Taliban Torch UNRWA Summer Camp In Central Gaza; Only Memorizing the Quran is Allowed! 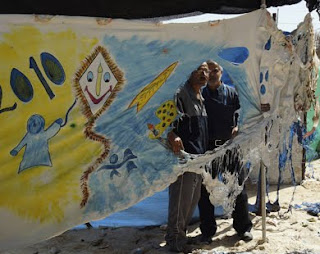 "A group of unknown gunmen attacked on Monday at dawn a summer camp that belongs to the UNRWA (United Nations Relief and Works Agency) in al-Zawayda area, north of Dir al-Balah in central Gaza. Eyewitnesses reported that the attack against the school students’ summer camp caused excessive damage and that the gunmen torched most of tents and property; no injuries were reported. They added that the gunmen first tied the guards outside of the camp and then torched it.

This is the second attack of its nature [Where is Hamas' "security?" Or, was it actually done with a nod from Hamas?] against an UNRWA summer camp that’s costs thousands of U.S. Dollars and are meant to provide relief to the children in the impoverished and besieged Gaza Strip. UNRWA also spends considerable money and effort to train those in charge of the camp.

The first attack was carried out at the beginning of this month; the summer camp was located in Sheikh Ejleen neighborhood.

After the first attack, the dissolved Hamas-led government in Gaza condemned it, and stated that its police and security forces managed to apprehend several suspects. "
Posted by Tony at 7:00 AM